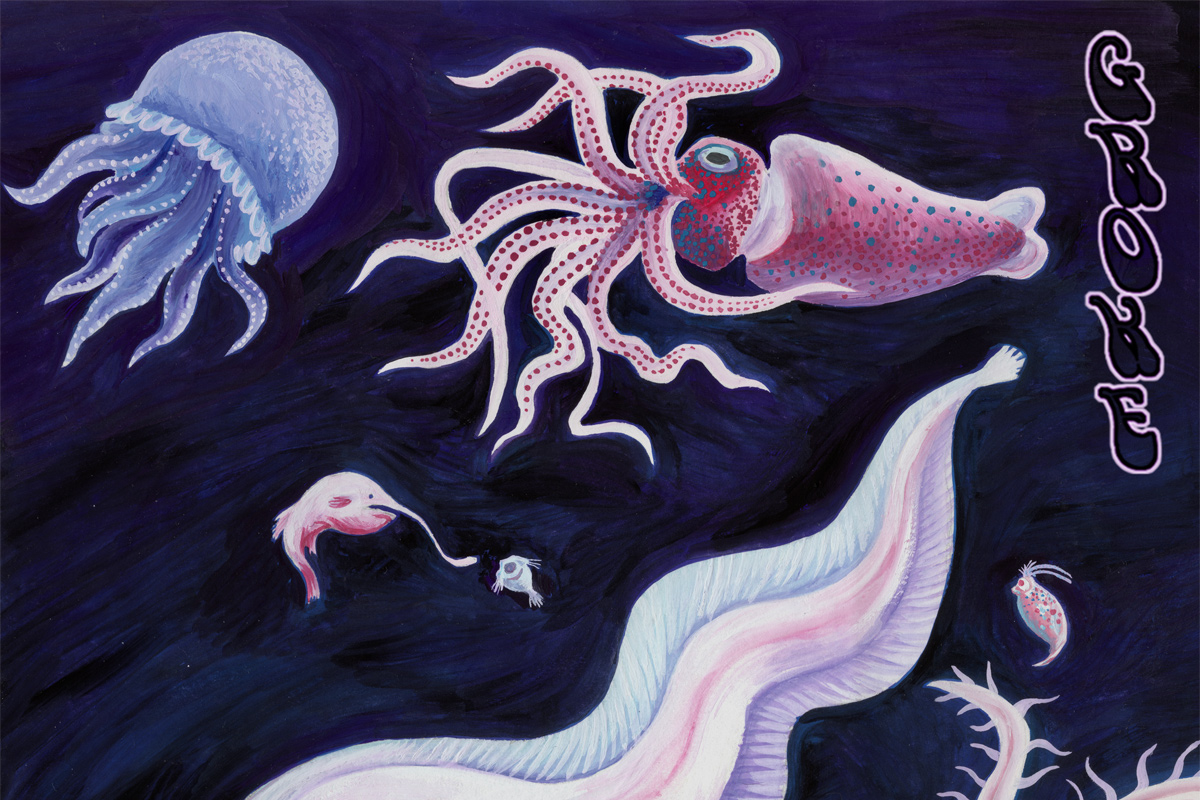 Electronic Music Production student Dougal Abbott (Groke) recently released his debut EP, 'The Dark Deep' on MAD ZOO; a 6-track concept piece that takes the listener from the surface of the ocean to the its darkest depths. We take the plunge to find out more…

Tell us a little about your journey into music production, how you first got it making music and what led to where you are now.

In year 8 I was very into dubstep and was curious how the weird sounds were made, so I downloaded garage band on the iPad and played around with that for a while. I then graduated to the Korg IMS 20 app and made stuff like this before getting Reason and finally Ableton when I was 14.

I feel like I've gone through many many genres since then but these days I'm very much drawn to the sounds of trap and kind of PC music hyper-pop.

I think my mum found a leaflet for it somewhere. I had actually lost a lot of enthusiasm for music production at around the time I was applying to universities and all my previous experiences with music in education had been a letdown. I was quite set on studying biology instead, but when I went to a dBs open day I saw that it was the perfect course for me and I still believe that.

You recently released ‘The Dark Deep’ EP. Could you tell us a little bit more about it?

In the last four years I've had loads of ideas for projects and just when they were nearing completion I'd lose enthusiasm with them and start chasing something completely different, so for ages, I never really released any music. But I slowly developed the discipline necessary to complete a cohesive EP and now finally, I've managed to finish it, which I didn't honestly think I would the whole time I was making it, and I still find it hard to believe now haha.

The concept for the EP is really cool, beginning at the surface and sinking to the deepest part of the Mariana Trench. Where did that initial idea come from?

I'm very inspired by visual media. I have a folder of cool images which I sometimes go through for inspiration and there was a really cool picture of a squid so I decided to kind of make a squiddy growl sound with Serum. I then made a very small part of a song around that sound which ended up being the drop of Twilight Zone (part of the growl can be heard at 1:13 on that track).

I found lots more images of deep-sea creatures, all of which got me pretty inspired and so I decided to make a collection of tracks based around it. Initially, it was all going to be a lot more UK dubby like Twilight Zone as thats what I was into at the time but my musical taste inevitably changed and so did my production style so it became the weird bunch of genres it is today.

The EP was released through MAD ZOO. How did you get involved with them for this release?

The head of Mad Zoo, Mat Zo, is one of my favourite producers and I think he and his label strike a really good balance between experimental listening music and more accessible dancefloor music. So I sent it to them and a few days later they said they were interested, so we called each other and the rest is history!

One of the most impressive aspects of the release is the way the music reflects the journey from the surface to the ocean floor. What was your creative process for marrying these two elements together?

Although it's a very conceptual project, I still wanted the focus to be on making good music, so I made a bunch of tracks I thought were cool, without really having any idea of the structure of the EP in mind, and slowly the idea of drowning then descending became the overarching narrative for the project. I then ordered and finished the tracks off with this theme in mind. The only exception to this is the final track, 'Rock Bottom', which I conceptualised after all the other tracks were pretty much done and was intended to glue the theme together.

Can we talk about the fantastic artwork that adorns each track, which was created by your mum? Was she always your first choice to create the artwork?

Yes, the artwork is one of the best parts of the EP and I'm very grateful for my mum for doing it all. Yes, she was always the first choice because I knew she'd do a great job. The EP artwork came about by me sending her loads of the images that inspired the tracks and giving her a bit of direction and then her taking it from there. She's a stained glass artist so she hadn't done any painting in a while but obviously she pulled it off very well! The artwork for the singles was done later and was based on the reference image I used when making each track.

Did you play her the individual tracks before she made each piece?

Yes, the album was pretty much done when she started the full EP artwork so she had heard a few versions of it by then. Everything was done and mastered by the time she did the single artworks and so she was quite familiar with the tracks at that point

Your track ‘Luminous Lure’ was used in a DJ set at this year’s Nocturnal Wonderland. How did it find its way into Subtronics’ set?

Yes, watching the video of him playing it was a very exciting moment for me! I'm not sure how he found it. I get the impression he's very active on social media and SoundCloud so maybe he just got in his newsfeed somehow?

How has the backing of MAD ZOO and the exposure through Subtronics’ set helped raise your profile?

I've self-released quite a bit of music in the past, although admittedly nothing as good as this EP, and it''s all kind of fallen flat on its face, so Mad Zoo's support has been very helpful and here are a few of the reasons why.

Andrew (who I believe is the other main component of Mad Zoo) has done a great job with getting my tracks heard on various streaming services and has managed to get many of the tracks on Spotify editorial playlists (which has helped tremendously) as well as getting some cool articles about the tracks and much more.

As for Subtronics, I've never communicated with him directly but he reposted and commented on the track, shouted it out on Instagram live and obviously played it at Nocturnal Wonderland which I'm very grateful for. Luminous Lure has had support from lots of big Riddim producers such as Bandlez, MVRDA and Samplefire and I think that's all because of Subtronics' initial support so I think that was what kicked it all off.

Other than the above, what crucial element has been vital to helping you establish yourself as an artist in the scene?

It's definitely mainly been down to Mad Zoo and the fact the music is a bit different to what people are used to in my opinion, but maybe some of it comes from showing a bit of personality online, having a good network of friends that have supported it and interacting with and showing gratitude to the fans and anyone who has supported it.

How has your time at dBs helped push you creatively?

It's made me try a lot of things that I wouldn't have by just staying in my room such as learning how studios work, how to navigate the vast world of microphones and mic placements, performing live, understanding and partaking in the collaboration process and many other things. I think this year, however, I'm definitely going to get pushed the most creatively and I'm very excited about it.

What piece of advice would you give to aspiring artists that are looking to make a break in the industry?

I don't think I'm very good at the 'industry' side of music but more broadly speaking, my best advice for producers is definitely to do some form of creative music production every day! Two or three months ago I started doing 'daily musicals', which involves spending around 15 minutes to three hours on a new Ableton project doing whatever I want every day, and it's helped so much and has made music production so much more natural and enjoyable and I feel like I'm at my creative peak because of it. So I reckon, maybe naively, if you do this and get the music right, with time, a break is inevitable.

I've got at least two more releases with Mad Zoo, one of which will be an album (which will also be for the 'Working to a Brief' module), and the other will probably be an EP. If I have time there might also be a little remix of Smells Like Teen Spirit, but apart from that who knows!