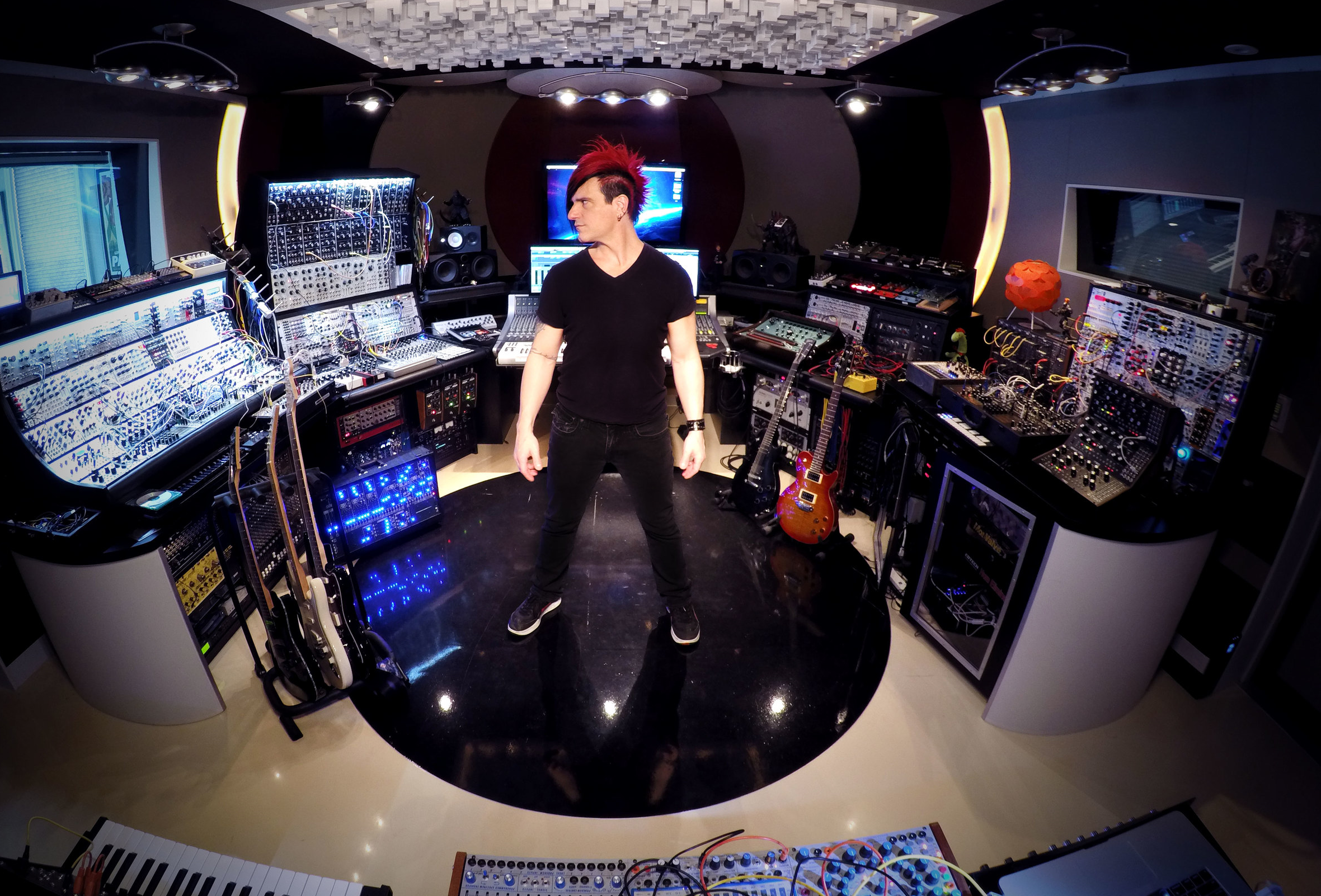 Celldweller is the musical alias of Klayton. Based out of Detroit, in the USA, his fusion sound of influences include everything from the synthetic elements of drum and bass, dubstep and electro to the organic elements of heavy rock, metal and orchestral genres. It's this unique sound that has his fanbase continually grow for his own original music projects and landed him soundtrack and synth programming gigs on movies and blockbuster games such as Dead Rising 3 and Killer Instinct! We tracked him down in his jaw-dropping studio to find out about his favourite kit, his techniques for making music and to see if he'll ever stop buying Eurorack modular gear!

Tell everyone a little bit about how you got started in this business?
"As a musician. I started by playing drums as a teenager in metal bands but that wasn’t enough. I needed to figure out how to write songs, so I’d watch the guitar players and when they would leave to grab a drink, i’d pick up their guitars and try to imitate what they were doing. Outside of a few drum lessons, I’m a completely self-taught musician."

When did you realise that things were getting serious?
"Maybe two or three weeks ago? [laughs] There was no real overnight tipping point. I’ve just always sacrificed almost everything else in my life for the ability to make music. That includes money. I wouldn’t spend money on anything - i’d save and starve 'til I could afford to buy one piece of gear or another. I’ve just been at this for long enough to have built a few income streams that have allowed me to build my studio and equip it with gear I could only dream about when I was younger." 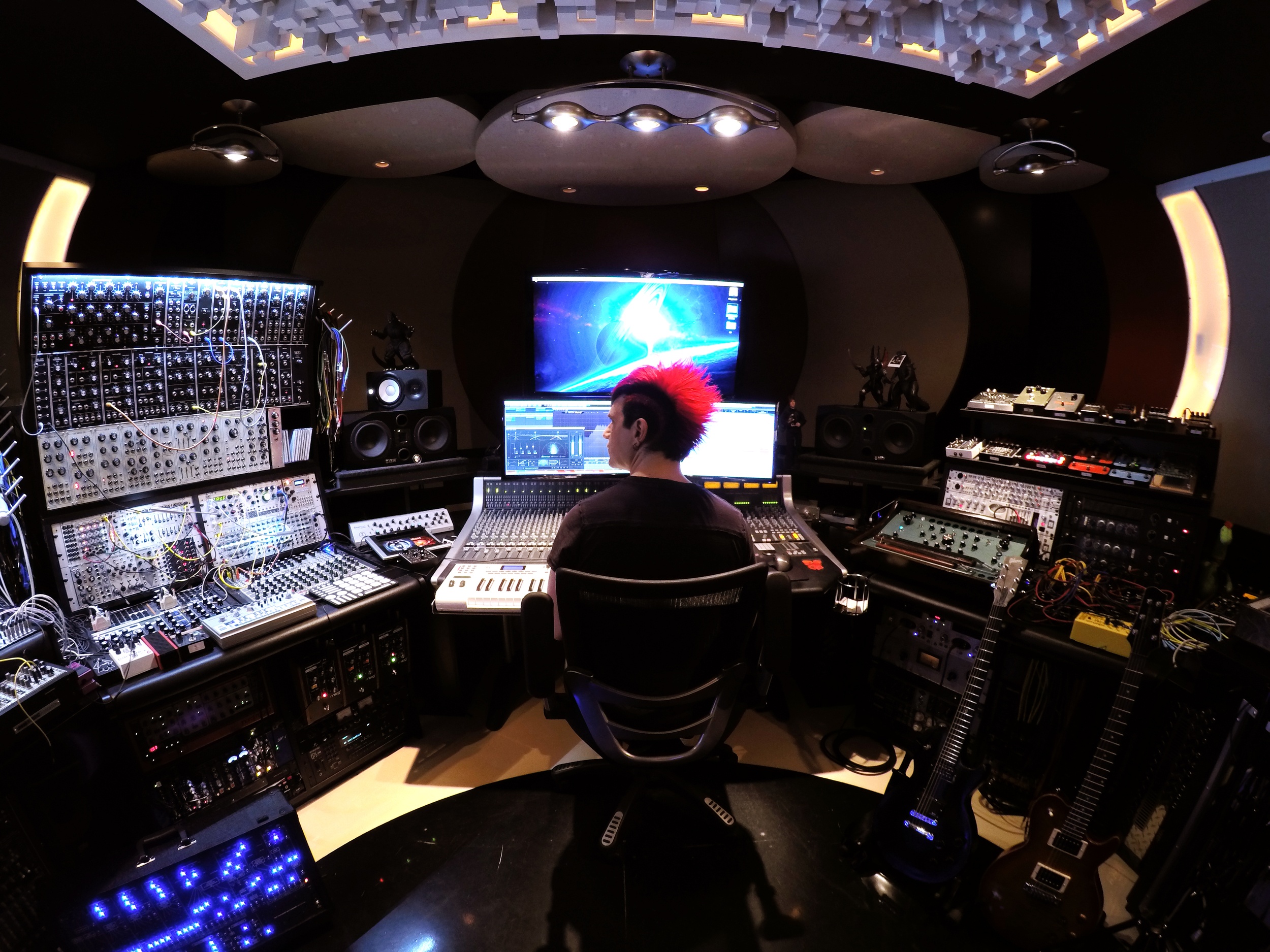 Tell us about the studio and it's design and how it's still growing. What would you like to buy next?
"I WANT EVERYTHING. But, since i don’t have the room here for everything my next plan is to build another Eurorack Cabinet to my right, which will give me another 1200 HP of space to start filling up!"What are your favourite bits of software? With all that hardware do you find yourself mainly working in audio and tracking sounds in or do you still program software and send MIDI?"I’ve always been hybrid-minded. So beyond just my style of music which blends many styles of music that wouldn’t normally go together, I approach production in a similar manner. I’m not a purist, so I don’t bother with arguing for one method or another. It’s simply a question of 'what sounds good?'.

"I do track quite a bit of hardware and edit from there and there are things that are just much better suited for software. I am just now wrapping up a score for the upcoming film “The Dunes.” I used a good combination of both analog and modular synths and soft-synths. With the modular stuff, I had to be pretty sure what i was creating was going to make the cut because recalling the sounds wasn’t an option. I also created many custom sounds in Alchemy and Native Instruments Kontakt that I used throughout the film. The rest was pure audio manipulation in the box. So overall I tend to blend Hardware and Software based on what sound or vibe I’m going for." 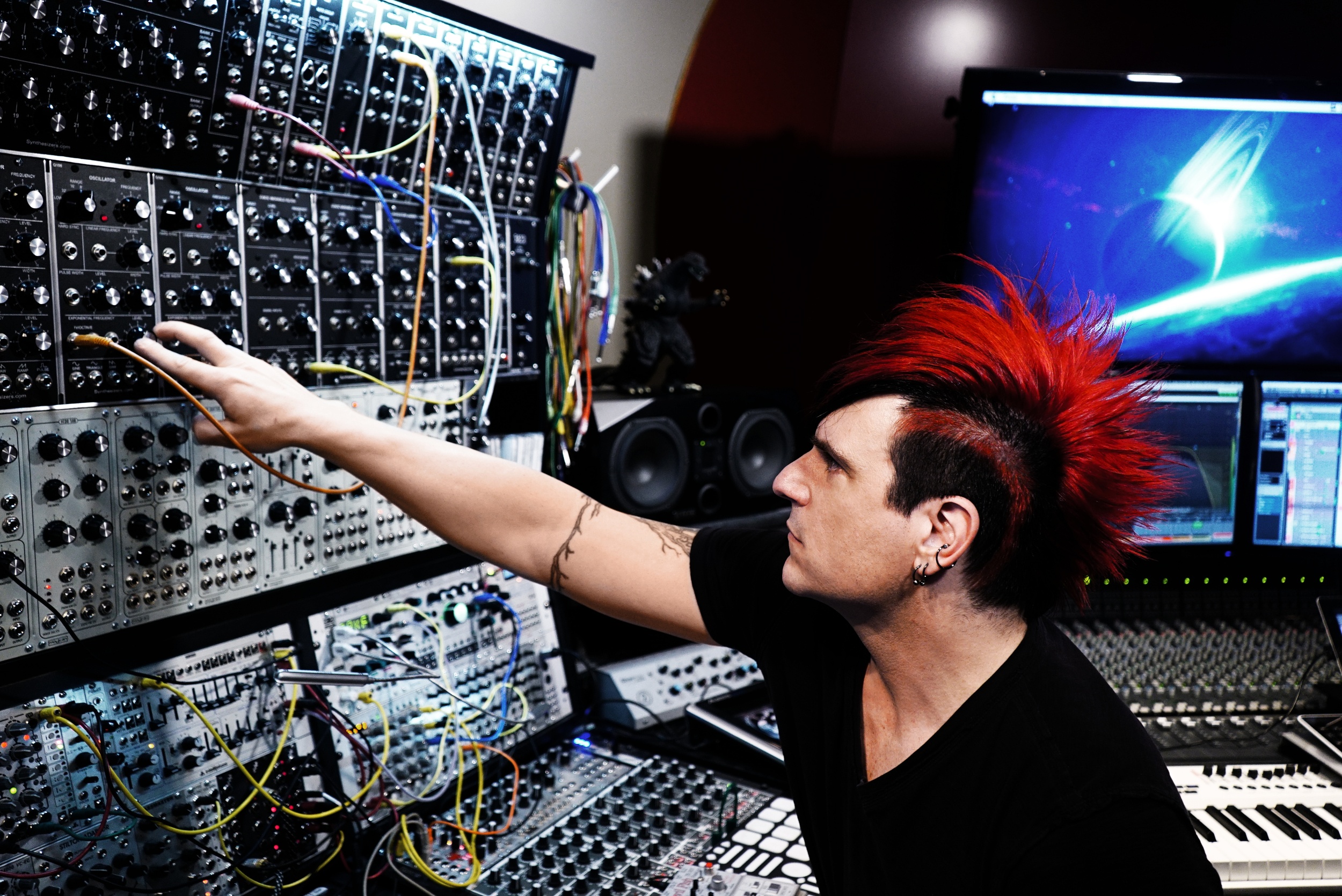 How much modular gear have you got now?! Do you think you're going to be able to stop?!
"Answer to your first question; not Enough. Answer to question number two; I just got out of the Modulars Anonymous rehab program. It didn’t work - I relapsed immediately. I probably have around 2000 HP of modular stuff, and growing. I’m not a collector - I use the stuff in almost every production. Some artists like to spend their money on expensive cars and Jewellery. That’s absolutely their prerogative. I spend almost no money on anything extracurricular - all my money goes back into gear which is a reinvestment into my career." 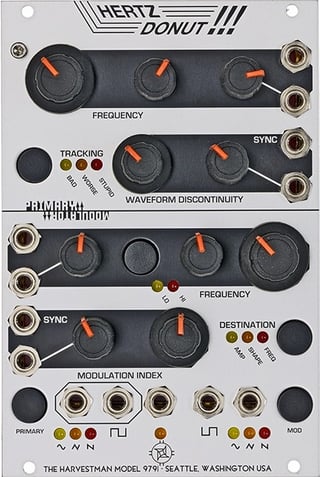 Do you remember the first few modules that got you into the modular way of doing things?
"The Harvestman Hertz Donut mkI was one of the first single modules I got in addition to a Pittsburgh Modular Foundation. Once I heard how this stuff sounded and started to wrap my head around the fact that they didn’t really work as a synthesizer unless you patched up, I was hopelessly hooked."What have been your most recent projects? "I just finished a score for the film 'The Dunes'. In the last 6 months or so I have been synth programming for a few movie scores Teenage Mutant Ninja Turtles: Out of the Shadows, Deepwater Horizon, Concussion, The Last Witch Hunter, Blood Father. I’m currently co-scoring the Killer Instinct video game for Microsoft and quite a bit of other things that I try to fit in between the cracks.

How does scoring for something compare to writing for yourself?
"Scoring for someone else is definitely different from doing your own thing. I can’t just do whatever I want - I need to serve the film or the game and make sure the music transports the viewer or player to the world they should be existing in at that moment. Fortunately I’ve gotten gigs based on people knowing what I do, so they want me for their project because they know what I’m capable of. This means I still get to do whatever I want, make music I like and be involved in all these cool projects at the same time." 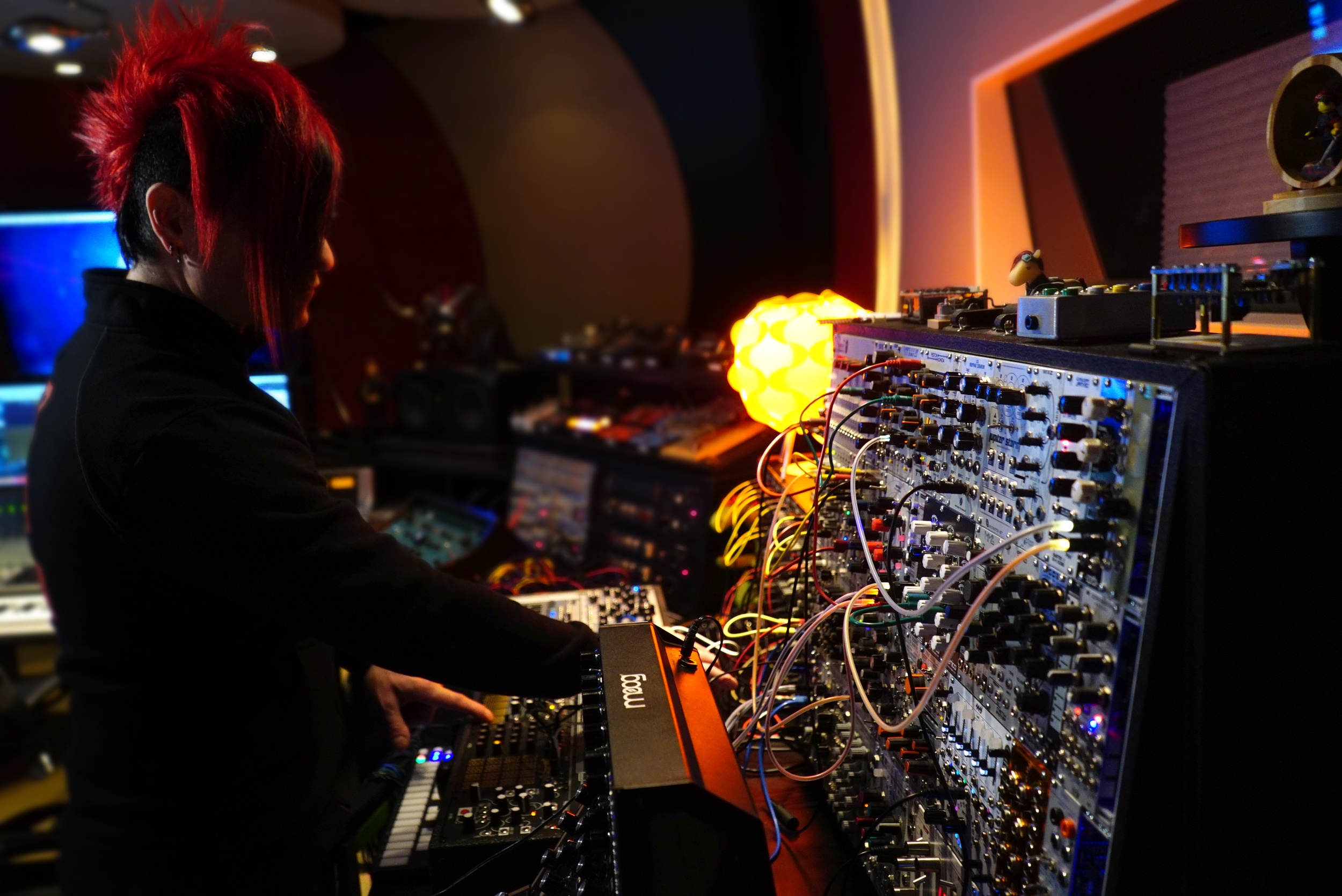 What's coming up for you now?
"I have two other solo musical projects outside of Celldweller that I will be completing albums for this year. Circle of Dust is where it began for me. In the late 80s and through the 90s this was my project that enabled me to venture into experimenting with combing electronic music and metal. I’ve come back to it over 20 years later and making a brand new album. Then there’s Scandroid which is my 80’s new wave thing. I’m using almost all hardware synths and vintage drum machines etc which makes it really fun for me."Any tours or remixes?"No tours, thank God and currently no remixes on the plate. I don’t do many due to time constraints, but I generally enjoy them when I do.And you have some new software coming out?Yeah, I recently announced my hardware/software company Refractor Audio. The first thing I released in June 2016 was my brand new Sample Based Instrument Transport. It contains over 2000 samples I’ve created, most on my modular synths processed through analog outboard gear.What about hardware?"We are now currently in development creating Eurorack modules because I have a bunch of things that I just want for myself in my studio, so I’m imagining there are other people in the world who may want the same thing. Check out the progress at RefractorAudio.com.