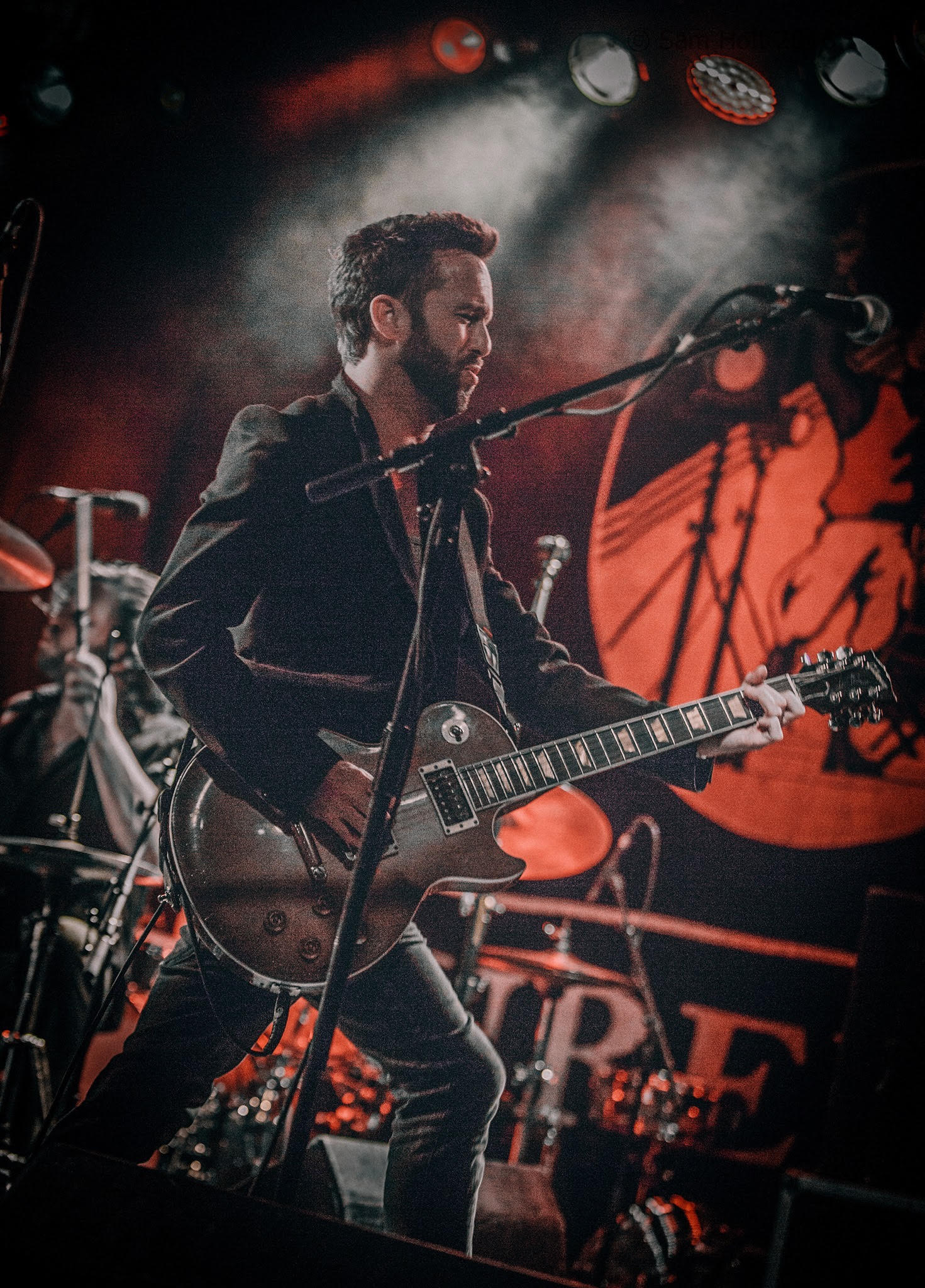 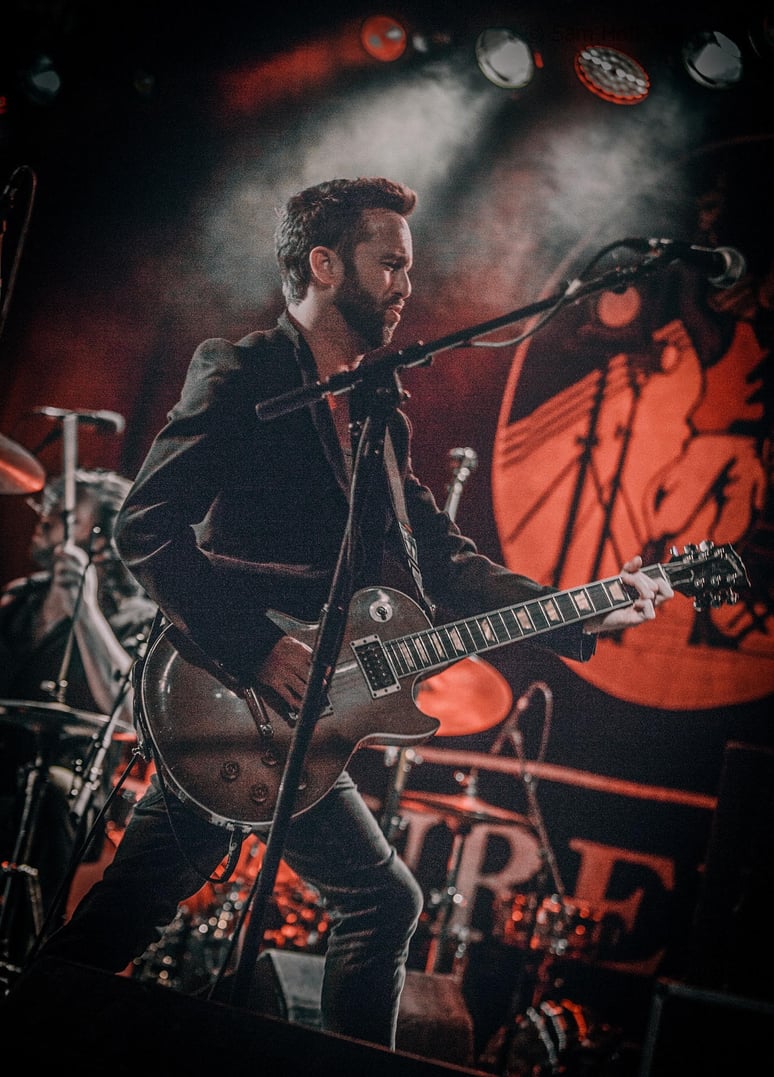 Manchester's Federal Charm are already being hailed as the next big thing in the new wave of alternative blues rock bands. If you haven't already heard about this band you soon will. Federal Charm take influence from the classic 70’s bands by combining the retro sound and adding a modern unique take that makes them relevant to today and gives them wide appeal. Their fresh direction has turned heads in the industry with many describing the band as having the most cutting edge debut album in recent years. Having seen them play on the first Planet Rock Roadstars tour in 2016, we put in a call to guitarist Paul Bowe to chat inspirations, the UK blues rock scene and what Paul has learnt from playing in bands since a teenager.

How did you start playing and who are your inspirations?
“I’ve been playing for about 25 years now and being surrounded by classic albums on vinyl as a kid really sparked it off for me. Everything from Rainbow to Led Zepp, to Bowie to Sabbath is my thing, really anything from the late 60’s and 70’s. I took an interest in playing drums initially for a couple of months but when I went to a Van Halen gig at 8 years old and saw Eddie play ‘Eruption’ it completely blew me away. My very first guitar was a £15 red coloured non name acoustic which I remember coming home from school and it just being there. My uncle put together a videotape of clips of all these different guitar solos which I would watch everyday after school and thrash away on the guitar thinking I was a guitar hero! The bug bit there and I’ve been obsessed with it ever since.” 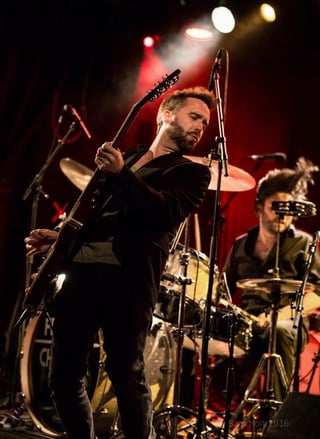 Tell us about your formative years in bands, what did you learn from the experiences?
“We moved to Leeds as a family when I was about 13 and I started a band with my high school friends, man it was terrible but a lot of fun playing in the garage at the time! My music tastes developed a lot more and my first serious band was with my brother when I was 15/16 called ‘Hiatus’, we were together for about 8 or 9 years. We were quite a heavy sounding band, being the early ‘90’s the grunge scene was big and we were really into the Soundgarden kind of vibe at the time, I had long hair, dreads and all that then! We played all over Manchester and the surrounding area and were certainly well known locally but we were young and didn’t have the business acumen or the direction that I have now. When you’re younger you tend to sit back and wait for things to happen to you rather than go out there and get them yourself. I think gaining experience and making mistakes has helped me learn that you need to have a plan, that time flies and becomes more of a commodity so you need to use it well. Setting goals and targets such as an EP release out on date X followed by gigs on dates Y and Z to promote it - it’s the simple things that are all too often not planned out well with a timeline by younger bands.”

What’s your view of the blues rock scene in the UK at this time and what can the youth of today do to help it?
“I think the scene in some ways is very healthy at the moment. There’s a lot of good people taking the original I-IV-V format and putting a fresh twist on things The word blues gets thrown around so much in the rock arena and there has to be diversity in order for it to survive. I have a strong feeling about blues and classic rock in that we’re always saying that we want something new but the ‘blues police’ sometimes put up unnecessary snobby political walls to stop young people progressing. Let’s be honest here, there’s only so many times someone can take a Fender Strat, plug it into a Marshall and play that old shuffle riff and sing about how their baby left them! I’d much rather see people doing something different with the blues than some old guy in a pub playing the same old thing and him and his friends thinking they write the blues rule book - if such a thing existed! Going forward I think the youth of today should study what’s come before, be respectful of it, but pull it apart and put it back together in different ways which is what I try to do with Federal Charm.”

You’ve toured throughout Europe, what have you learnt from that that you can pass on to the students at dBs Music?
“We tour playing venues of 200 to 400 capacity so I think your guys will be able to relate to that a bit more than an arena rock band on tour. We tour in the back of a transit van and I will say that you need to learn to forgive your band mates for who they are very quickly in order to make it an enjoyable experience for everyone! Everything for me is about how to get to the show that night and to enjoy the show. You’ve got to make sure you get enough sleep as I know what it’s like being a young band on the road; you can’t play rock star as you’ll burn out real quick, you have to remember it’s a job. It’s tough when you’re driving for 12 hours to play a gig for very little money in a new territory where the crowd may not be as big as back home but every show is another step towards where you want to be in that you’ll gain more fans, people will buy the album, buy a tee shirt etc...but only if you put on a good show.”

Tell us about your preferred guitars, amps and pedals...
“I love Gibson guitars, I use two in Les Paul 1060 reissue and 1983 SG Standard with a LP humbucker in it. The sound of them for me is a lot meatier, a lot heavier, thicker and warmer for me than others. I’ve switched from playing through Marshall amps of a TSL 100 to Orange heads in a Rockerverb 50 MK2 and 100W Thunderverb. I’ve just struck an endorsement deal with Orange for which I’m very thankful for. The Orange amps are so punchy and when I used them on the last album ‘Across The Divide’ they just did it for me and these all go through a Marshall 1960 4X12 cab. I use a few pedals in a Jim Dunlop Crybaby, two DD6 Boss Digital Delay, an OC3 Super Octave, an Electro-Harmonix phaser and Holy Grail reverb, a compressor and a tuner. The amp and guitar do most of the work tonally wise - really not a lot of pedals unlike when I was younger!”

How did Federal Charm come about and what’s next for you guys?
“We got together through our love of the blues and classic rock. The idea was to set up a blues rock band but within 2 days we ended up writing quite heavier riffs and it became a different monster. We’ve played about 15 UK tours, released 2 albums and now we’re at a point where we’re very busy writing and recording for our 3rd album with our brand new singer Tom Guyer. We’re really excited to have him on board as his range is HUGE and he has this Chris Cornell mixed with Robert Plant thing going on which is really exciting. In fact, as soon as you and I are done, I’m straight back into the studio with the guys…”