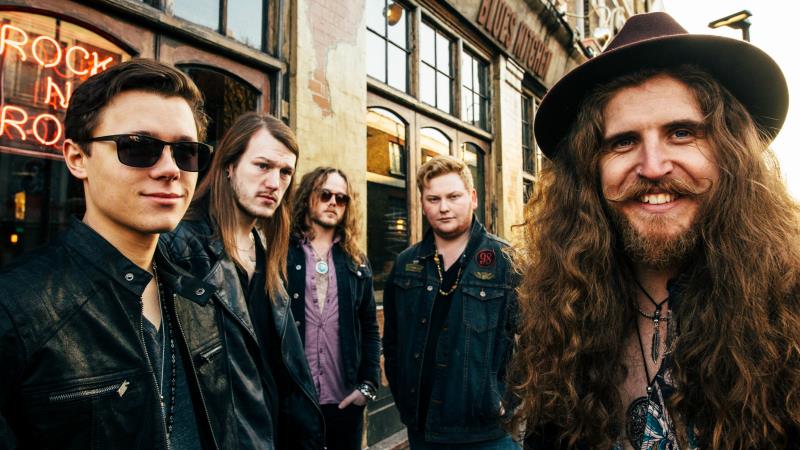 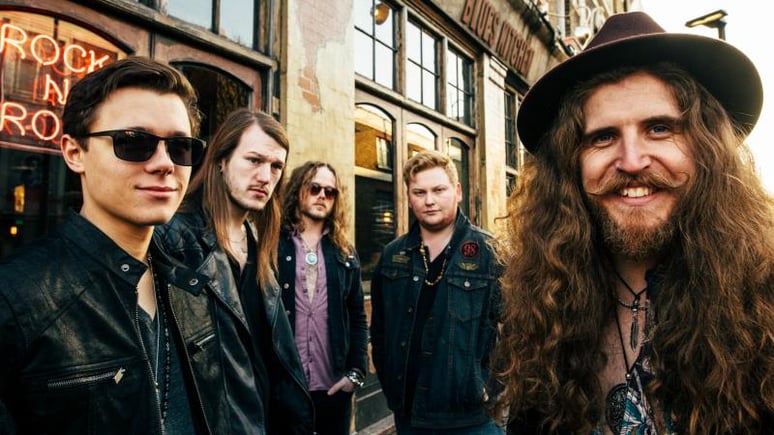 More and more young bands are coming to the forefront in current day classic rock these days, all the while being respectful of their forefathers, with Bad Touch holding a bright torch for keeping things real and fun. Their debut album, Truth Be Told has seen them gain Planet Rock airplay, festival slots and tours, with them playing incendiary shows, being down to earth, hardworking and honest. We sat down over a beer for a candid chat before one of their recent shows. They take what they do seriously, but certainly not themselves...

You guys got together when you were in school/college. How did that come about?
Dan: “Well, I failed music at school! We’re all from different backgrounds and the band's line up has changed throughout the years but we’re now really solid. There’s two high schools in our town Dearham in Norfolk and the old guitar player and I went to one while Bailey and George went to the other. We were in pub bands playing wherever we could, whenever we could and got together through that after doing an old school flyer advertising for a drummer and found George, Bailey filled in on bass one time and never left.”

George: “This was all back in the days of MySpace, remember that? I got a message through about a band that needed a drummer and that they had broken up but not told anyone so I arrived via that.”

Stevie: “Yeah, a Bebo request, which Harry will know nothing about! We thought we’d scrape the barrel with George to be honest.”

Harry: “I’m fresh out of the womb at 20 years young so these guys are all a bit older than me, they think they’re wiser too, but I’m not so sure. I was contacted by their manager, they called me in for an audition, we played a few songs and last minute they asked me to fill in. It certainly beats going to work.”

Stevie: “Harry learnt everything in four days, which was just so impressive and professional. This band is my main priority in life, I don’t have anything else as the only other thing I know I’m OK at is pulling pints and I sure as hell don’t wanna do that for the rest of my life.”

Dan: “We all still have jobs mind, but the band comes first. We’ve all lost jobs, but if you can hold down a job whilst you’re getting going that’s a good thing as it gives you an income to support yourself and band ventures. A band’s like a business, you have to throw so much into it.”

What lessons did you learn earlier on that you’ve applied now?
George: “I won’t name names but there are some crooks out there. We’ve made a mistake with one and it took a long time to get things back to a good place for us.”

Dan: ‘“Yeah, that was a mistake and we’ve learnt from it. You’re going to make mistakes, waste money at some point, but it’s what you do after that counts. You know, if you do something perfect, how can you know if you could do it any better? Music is the most important thing first of all. No one picks up a guitar and goes ‘I’m gonna make loads of money’. If you want to do that go and be a doctor or a dentist. Things like image are huge and there’s all the other things along with that but the whole point of being in a band is the music.”

Stevie: “The thing for me is that if you don’t take any risks, you’ll never get anywhere. If you sit in your bedroom playing guitar, that’s fine but you’ll never make any mistakes, you’ll never get anywhere so you have to be out there doing it, writing all the time and play your songs whether people like it or not as they are yours. You should also not expect too much too quick. When you’re 17/19 a couple of years is like forever for you. That was us 6 years ago and now we’re here.”

Stevie: “But why stop at 60? Unless you’re on a single carriageway road and that is the law!”

You entered and won the Marshall Ultimate Band contest, what’s it like touring with other bands? Is it really a competition?
George: “I kind of entered it on a whim. Did it and forgot about it. We were in Glasgow playing with The Quireboys and I had an email that we were the judges pick where 23 bands went through on a public vote and two were hand picked by the judges.”

Stevie: “When we got through to the last hundred, we started tweeting and Facebook posting about it which I think really helped.”

George: “I really like competition. It depends what kind of a person you are, I like pressure but it’s not the case of ‘I wanna be better than you’.”

Stevie: “Exactly! I like to call it a ‘gentlemen's rivalry’. That’s what I like about being on the Roadstars tour with Broken Witt Rebels. They’re so good, top people to be on tour with and it makes you want to do better as a result, to win their fans over and them win ours. Everything should always be a positive working with other bands. If there is an issue, don’t make a scene as all that will do is make you look like one of them, be the bigger band.”

Harry: “We help them load their gear in, they help us load ours. It’s a team effort, we’re all doing this for the same reason after all.”

Dan: “If we have some kind of success as a result that backfires on them and vice versa. I’ve never understood where people think that bands are rivals with each other. That’s always made up by the fans or press and it’s b*******.”

In this age of social media, there’s more and more people calling themselves promoters who actually do very little to promote. What’s your thoughts on the "Pay To Play” model operated by some promoters?

Harry: “Done it. The first time I did it it was amazing. I got to play in London and brought a coach of people down to the O2 Academy in Islington. Then I did it again and nobody came out. Now the promoters took my money and said ‘Here are the tickets, it’s your job to sell the night’. So effectively I paid someone to let me do the job they should of been doing. If it was my choice, I would say avoid it. Lesson learned.”

Dan: “You’ll know a real promoter as they’ll be the ones who will put the money up for the night knowing they have to make it back so they will do their job and not fob it off to the bands. The wannabe’s don’t do that, s*** man, you’ll be lucky to get a poster or flyer made by them as they think just making a Facebook event is enough.”

Out of all the shows you’ve played which have stood out for you and why?
Dan: “It’s hard to pick out one as there’s been so many but as I’ve been to Download every year for ages to play there was really special. We were like second band on and not expecting anyone to be there as no one see’s the first few bands play due to hangovers right?”

Stevie: “It was 1:20 in the afternoon if I remember rightly. The tent was packed and it was the first gig I’ve ever done the w***** lead singer thing by letting the band play first and then coming on late. When I got onstage this wave of noise hit me and I was like f****** hell! I did a high kick, first time I’ve ever done one and never done another one to this day, shouted some garbled words down the mic and had to pull myself together and get on with it. Blown away by the crowd’s response to us.”

George: “There’s a video of the first song. Listen to that then listen to the studio version and listen to the speed we played it at and it didn’t slow down all set! Something to do with playing the Redbull stage and having six cans each before going on I think…”

Bailey: “Download without a doubt. I got my first tattoo there. I had wanted one for a long time so it just made sense to get one.”

Stevie: “Yeah, it’s all downhill from here though!”

Tell us about where you recorded your album, Truth Be Told and the gear you used...
Stevie: “I used a microphone and I sung into it! Seriously though, it was an RE20 although we went through a lot of different ones. We recorded in a real cool studio called Mwnci Studios in Wales and the owner Jethro Chaplin engineered and produced it. He’s a great chap to work with, he wasn’t always our best friend but he got the right performance out of all of us and pushed us to our limits. For the facilities, location and gear he has there the cost is so good, really recommend it. We spent two weeks recording and one week mixing. We all tracked together as we like air to move when we play, no straight into a desk type of thing and it was all recorded digitally.”

Dan: “We mainly used Marshalls which were all pretty old in an original Silver Jubilee, a couple Plexi’s, one we called ’Purple Rain’ due to the vinyl on it and that was used for the solo’s, a JCM800 and a 900 also. A whole bunch of different Gibson Les Pauls, Strats, a Telecaster, some real nice acoustics and all with Rotosound strings. There’s also a Fender Supersonic amp somewhere in a song.”

Bailey: “I used my live gear in Ampeg SVT head, a Warwick Corvette Standard bass that I record everything with. I like things to stay how they are with my gear, pretty straight forward.”

George: “Same as I use on stage - for hitting everything Balbex sticks, a Natal Bubinga kit, at the time Sabian cymbals but I’ve switched to Amedia cymbals as I love those - they give me the attack and clarity I like, the dBs Music students should check them out.”

Harry: “I didn’t play on the album so live I’m playing a Gibson Custom Shop reissue of a 1958 Bourbon Burst Les Paul. A Marshall JCM2000 at the moment but I’m told I’m getting the aforementioned Silver Jubilee soon which will be very cool. My 2 X 12 cab has Celestion Vintage 30 speakers in it. I’m fussy with pedals; an Ibanez Tube Screamer with the clean channel and the gain for a main sound. I have a Way Huge Pork Loin (I tell all the ladies that) overdrive, another Tube Screamer for another overdrive, a Boss ‘63 Reverb and a TC Electronics Flashback delay which is set on whatever I keep it at and a TC tuner. I’m using a Jim Dunlop Crybaby at the moment as when I joined the band they bullied me for using a Joe Bonamassa one…”

What’s next for Bad Touch?
Dan: “We finish this tour, have about a week off and then we hit the road again with King King. We’re at Ramblin' Man Fair, Summertime Festival, we’re doing some dates with Dan Baird...basically we plan to not be off the road all year but towards the end we have to find some time to record the next album.”

Harry “Yeah, I’m keen for that as I’ve gone from a covers band to an originals band but I’m still playing other people's riffs as much as I have put my own stamp on them. Let’s get it done as I know people want more from us…”